Let him know how much you care… Give him the gift of Food, Fire, and Fun. Take him to Kasai.

We will be open at 12 noon to accommodate extra seating. Our 7-course Teppanyaki dining experience runs 1.45-2h hours.

Book Your Dinnertainment now at ReserveKasai.com

MOTHER’S DAY IS SUNDAY, MAY 8TH.
WE ARE OPENING AT 12PM

Let him know how much you care… Give him the gift of Food, Fire, and Fun. Take him to Kasai.

We will be open at 12 noon to accommodate extra seating. Our 7-course Teppanyaki dining experience runs 1.45-2h hours.

Book Your Dinnertainment now at ReserveKasai.com

MOTHER’S DAY IS SUNDAY, MAY 8TH.
WE ARE OPENING AT 12PM 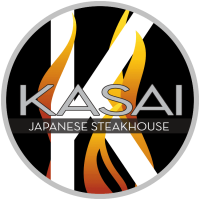 Kasai is happy to announce that we have included Arizona Sake to our Sake menu. An award-winning Arizona craft Sake company. This sake is handmade in Holbrook, Arizona by Atsuo Sakurai, a First-Grade Master Sake Brewer.

Arizona Sake was the only Gold Medal winner in the 2018 Sake Competition in Tokyo for sake made outside of Japan.

Atsuo worked in the sake industry in Japan for 10 years before creating his very own sake.

NOSE
Corn, light fruit and alcohol pretty much sum the nose up on this one. It’s basic with no depth.

TASTING NOTES
Medium amber in color, with gentle spiciness and sweet oak aromas. Mid-palate is smooth, with tones of maple, oak, and nutmeg. Finish is long, dry and satiny with a light toffee flavor.

NOSE
Instantly likeable and pleasant with notes of caramel, honey, orange, and vanilla. The nose balances these flavors well while also providing an underlying layer of oak and mint.

PALATE
Sweet and mellow with notes of brown sugar, vanilla, and toffee. The palate might be too sweet for some, but probably very enjoyable for most. Light amounts of oak and rye spice round out the palate.

FINISH
A moderate length finish with oak at the forefront. The finish really opens up and develops and ultimately ends by filling your nostrils. It’s a very interesting and full flavored finish for a 90 proof bourbon.

Classification: Straight Bourbon – SOMETIMES referred to as a “Wheated Bourbon”

PALATE
Sweet and balanced with caramel, vanilla and fruity essences

NOSE
Heavy with rich dried fruit, hints of mint and oranges covered with a dusting of cocoa. Faint vanilla and tobacco spice.

ABOUT
You’ll want to savor the taste of this epic Single Barrel again and again. It’s complex, full-bodied and surprisingly smooth with a delicate, long finish that’s unbelievably mellow. Drink straight up or on the rocks.

PALATE
Charred oak flavor that is complemented with sweet brown sugar, a touch of black pepper, and dried fruit to round it out

FINISH
A pleasant, lingering charred oak finish with a touch of dried fruit

Distillery: Sourced (Rumored to be from Dickel)

Age: 6 Years (Note that while all future releases will follow the 6 year age statement, 35 Maple Street Spirits has stated that this first batch averages more around 7.5 years)

NOSE
Aged for a minimum of 6 years in the barrel this bourbon leads with a scent of vanilla and sweet hay, accented by sandalwood and mace.

PALATE
It enters the palate smoothly, and the bourbon is nicely balanced with a hint of pecan pie sweetness.

FINISH
It fulfills the promise of its nose before evolving into a warm, rich, spicy sensation and leaves the drinker with a complex, yet balanced and long-lasting signature chestnut finish.

PALATE
Dark caramel coats layers of malt nuttiness and sweet graham cracker all warmed by green peppercorn and coriander spice brightened with a hint of cedar.

NOSE
A wildflower meadow showing dandelion, nasturtium, and fennel. The floral qualities are intense and concentrated. Late summer fruits round out the profile, among them Rainier cherry, watermelon, and crushed apple. It all integrates seamlessly with aromas of fresh oak, cedar, and applewood, with just a hint of char. The overall impression is that of splitting wood out in the yard when the trees are laden with fruit and the flowers haven’t yet begun to fade.

PALATE
Cinnamon rolls arrive with rich, buttery brioche dough, gooey caramel, and a spicy kick of cinnamon. The spice quickly expands to include wasabi and ginger. It’s underpinned by a savory undertone of boiled peanuts, and French butter.

FINISH
Quite crisp, with an initial burst of sea spray and lemonade. These fade to reveal lingering notes of raspberry eau-de-vie and pastis.

PALATE
Sweet and balanced with caramel, vanilla and fruity essences

NOTES
Rich oaky aromas. The taste is exceptionally smooth, with hints of vanilla, honey, and spice. Finish is crisp and clean, with long, lingering flavors.

Distillery: Said to be MGP

ABOUT
WhistlePig Whiskey kicked off our Rye Whiskey journey with the Quintessential Rye –our Small Batch Rye, Aged 10 Years -it’s the one that started it all. True to our original Master Distillers’ vision, it’s a high Rye whiskey with a bold, spice forward whiskey that offers new layers of flavor with every year of age. And at 100 Proof, it’s versatile no matter how you drink it. Ingenuity, determination, and a fearless pursuit of flavor led us here, and we never turned back.

96 Points from Wine Enthusiast, one of the highest rated Rye Whiskeys of all time. Certified Kosher.

PALATE
Sweet; hints of caramel and vanilla, followed by rye­spice and mint

Jack Daniel’s was established in 1886, and is the top-selling American whiskey in the world. It is produced in Lynchburg, Tennessee which ironically, is a dry county meaning the product can’t actually be sold there. Brown-Forman acquired Jack Daniel’s in 1956.

NOSE
Rich and robust, with slight hints of vanilla and fruit.

PALATE
Delicately smooth and creamy with hints of oak and the sweet flavor of vanilla.

PALATE
The perfect balance of spicy, nutty and vanilla notes with hints of sweet sherry and exceptional smoothness.

It’s aged for ten years, and distilled following the traditions laid down over the last 200 years by a succession of passionate and skilled master distillers. This is a truly classic single malt Scotch, made from malted barley which is first cold-smoked and then dried over a peat fire.

The smoke from the unique Islay peat gives Laphroaig its particular rich flavor. This peated whisky is renowned for its bold, smoky taste, followed by a hint of seaweed and a surprising sweetness. Full-bodied with a long finish, it truly embodies the quintessential Laphroaig character.

NOSE
Distinctively fresh and fruity with a hint of pear. Beautifully crafted and delicately balanced.

FINISH
The sherry influence appears on the back of the tongue. The swallow is quite gentle, with a light alcoholic bite. The finish is long, with lovely malt and sherry notes sticking around, waiting for the glass to be refilled.

Released: reintroduced with new clear bottle and the words “Double Oak” in 2018

ABOUT
The Glenlivet 12 Year scotch is a classic Speyside single malt characterized by a balanced and elegant flavor profile. Its flavors of citrus, honeysuckle, and vanilla promise to please those looking for a non-smoky flavor—no peat flavors here.

NOSE:
Citrus fruit, honeysuckle, and vanilla, illustrative of what a classic Speyside single malt should smell like. Do not expect peat, as that is not what this northeastern region of Scotland is known for.

FINISH:
Sweetness that lingers on your tongue but is gently overtaken by lemon zest and the crunchy bitterness of barrel tannin, with just a hum of vanilla beneath it

NOSE:
Strong raisin, currant, plum and baking-spice notes, with hints of honey and heather as it opens up

PALATE:
Upfront, it’s a fruitcake medley of warm bread, soaked raisins, cloves and a hint of black pepper. On the mid palate, it’s medium- to full-bodied, with a buttery softness and more baked bread. Toward the back of the throat, you get a warm spice-and-fruit exit, with a hint of wet tobacco leaf.

NOSE
It’s quite floral and malty, with notes of honey and apricot. Let the glass sit for a few minutes, and the honeyed aromas become more pronounced.

PALATE
Highland malts are all over the place stylistically, and so is Oban. It kicks off with sweet, luscious notes of apple and honey and a tongue-coating waxiness, which morphs into tart lemon and malt. Hold it on the tongue and saline, wisps of smoke, and a tingling oaky spice come to the fore.

FINISH
Long and pleasant, malty with undercurrents of lemon curd

Aged: All whisky in the blend must be at least 12 years minimum age

PALATE
More of those banana chips showing through on the palate, this time there’s a creamy hit of barley malt too, pepped up with a little allspice. Notes of ground walnut and caramel.

FINISH
Long, spiced nose with smoke on the tail.

Aged: Minimum 12 years for any of the blended whisky within. Black is a blend of apx 40 whiskies.

NOSE
Winter spice and treacle, hints of white pepper and a little citrus.

PALATE
Rich and full with notes of wood smoke and dry spice, hints of barley and cereal with creamy toffee and a distinct herbal note.

FINISH
Quite fruity and long with a note of sultanas and mixed peels.

PALATE
Supple and balanced. Good toffee and hints of very wistful smoke. Chocolate, hints of grass and a good hit of malt.

OVERALL
One of the ultimate premium blends, Blue Label is a legend in its own right and will continue to be.

LEAN AND SLIGHTLY SWEET WITH NOTES OF PEAR, QUINCE, AND HINTS OR RED FRUITS AND VANILLA

DECOY – SONOMA
Layers of green apple, white peach and honeysuckle, as well as hints of cinnamon. On the palate, a supple texture from sur lie aging is balanced by bright natural acidity, which adds poise and length to the lush, pure fruit flavors
>> PAIRING: SCALLOPS TEPPANYAKI
6OZ 12 / 9OZ 18 / BTL 46

(GF)  = Gluten Free Item
◊ Gratuity of 18% may be added to parties of eight or more.
◊ Maximum dining time for teppanyaki is 2 hours to better accommodate all guests and allow the next show to prepare for the next scheduled guests.
◊ Please inform you server if you or any person at the table has a food allergy.
*These items may contain raw or undercooked ingredients and are cooked to order. Consuming raw or undercooked meat, poultry, seafood, shellfish, or eggs may increase your risk of foodbourne illness, especially if you have certain medical conditions.

– Kasai Happy Hour. Daily until 6pm. $2 off all beer and wine, $3 off cocktails, $2 off all appetizers.
– Teppan Happy Hour daily until 5pm. Special pricing on select dishes. All the flavor, all the fire, all the fun.

Get Kasai Info, Updates, and Deals

Get The Latest Kasai
Info, Updates, and Deals

SIGN UP TO RECEIVE OUR UPDATES, SPECIALS, DEALS, AND MORE. BY SIGNING UP YOU ARE AUTOMATICALLY ENTERED TO WIN A $200.00 GIFT CARD GOOD AT KASAI. NO PURCHASE NEEDED. MULTIPLE ENTRIES DO NOT INCREASE CHANCES OF WINNING. ONE WINNER PER MONTH.